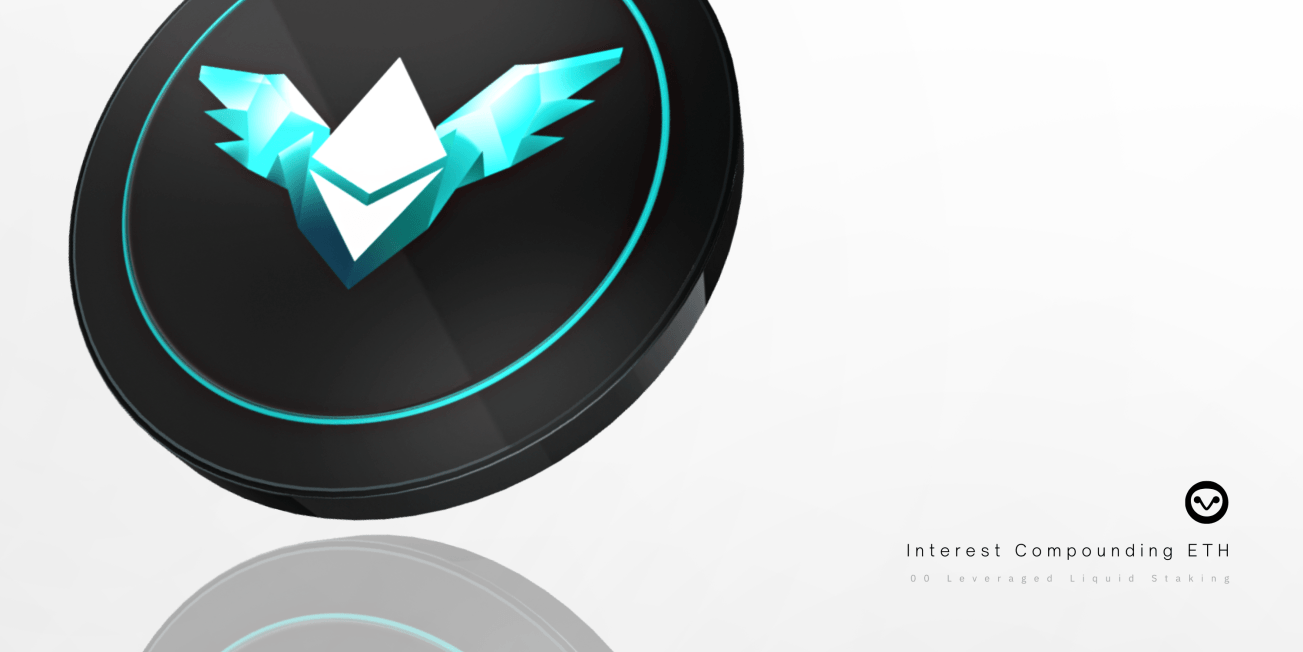 The Interest Compounding ETH Index (icETH) gives token holders amplified exposure to the staking yield on Ethereum, and it accomplishes this through a leveraged liquid staking strategy. As the Index Coop’s first yield product, it is important for users to understand how icETH works as well as its risks and returns.

icETH provides an enhanced yield on ETH using a leverage liquid staking strategy built on Set Protocol and Aave. This product uses the same battle-tested leverage token infrastructure as the tokens, and it executes a recursive process for maximizing yield.

Within Aave, icETH deposits Lido’s liquid staked Ethereum token—stETH—as collateral and borrows ETH, which is then swapped for more stETH. That stETH is then deposited as additional collateral in Aave, allowing for more ETH to be borrowed and subsequently swapped for additional stETH. This cycle repeats until reaching the target leverage ratio of 3.1x. If the index needs to deleverage, it will execute the same process in reverse: exchange stETH for ETH, reduce debt position in Aave, repeat until reaching the target leverage ratio. 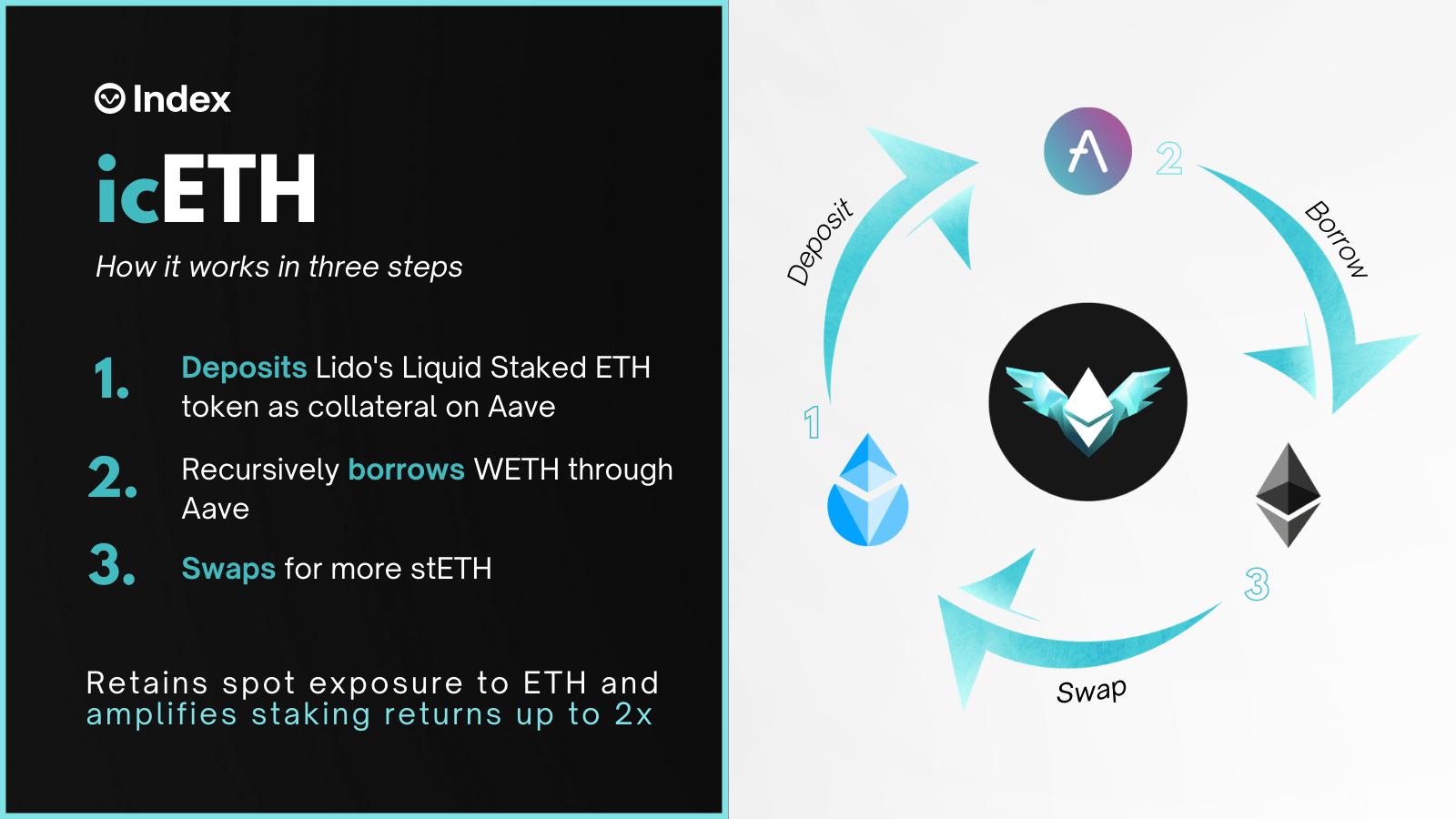 In addition to the primary keeper system, there is a secondary safety mechanism in place called ripcord. If the real leverage ratio were to exceed 3.5x and the primary keeper systems were to fail, the ripcord function could be called to aggressively recenter the index back to the target leverage ratio. This function is publicly callable and incentivized with 1 ETH, adding another layer of permissionless defense against liquidation.

For icETH holders, all of this functionality—the collateralized debt position management, the rebalancing, the liquidation protection—is abstracted away and automated by smart contracts. There is no need to actively monitor balances or manually intervene as markets move. Simply hold icETH to capture a premium yield and retain spot exposure to ETH!

What are the risks?

The high correlation between the collateral asset (stETH) and the debt asset (ETH) also significantly lowers liquidation risk. Because their prices move in tandem, there is a more persistent leverage ratio compared to uncorrelated collateral and debt assets like ETH and USDC (the composition of ETH2x-FLI). The inherent price volatility of ETH compared to USDC requires daily rebalancing of ETH2x-FLI to maintain a healthy loan-to-value (LTV) ratio. For icETH, the LTV ratio is more stable and only requires rebalancing every few months. The result is lower liquidation risk and less volatility decay for icETH, enhancing fund safety and preserving NAV. 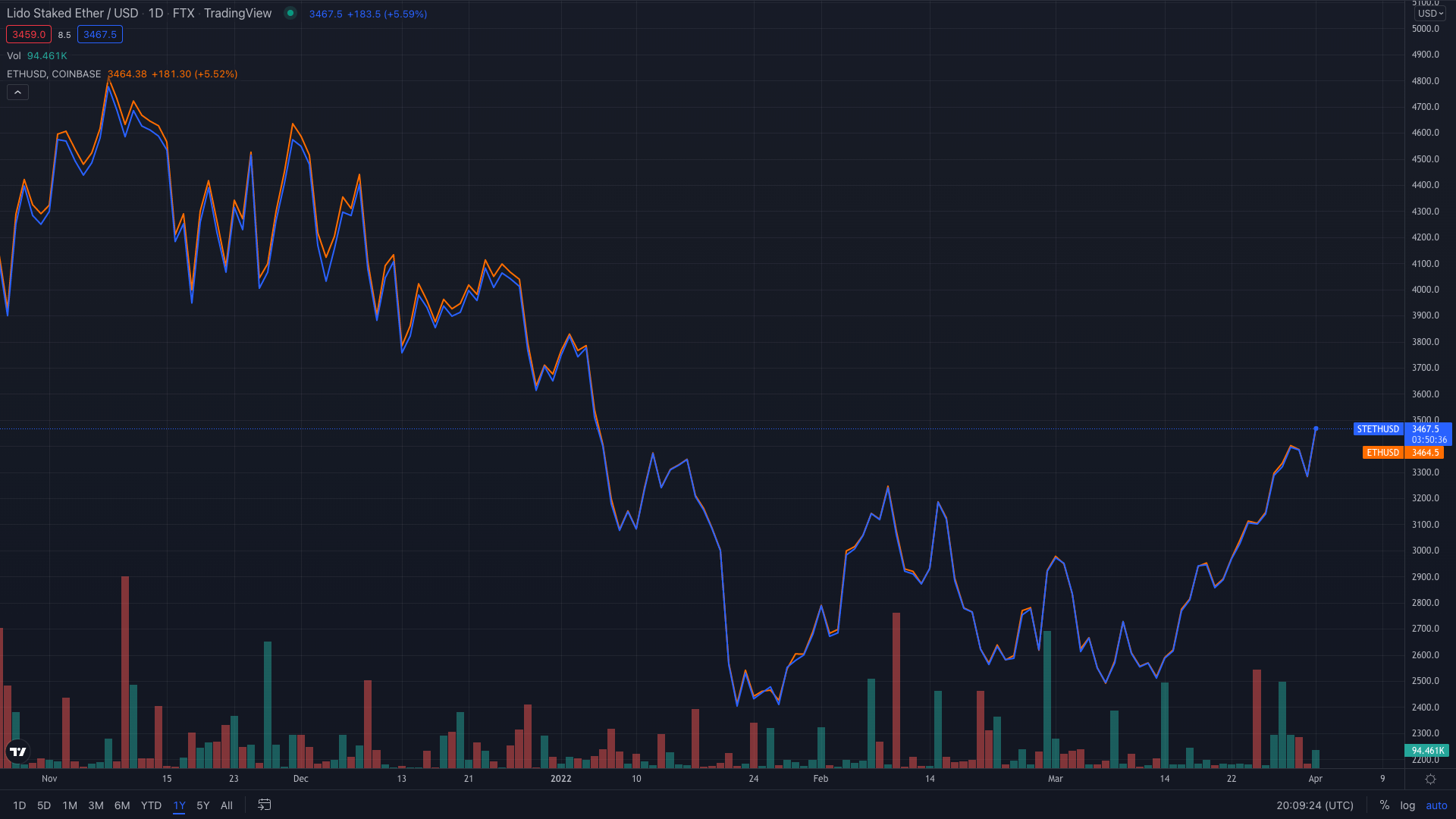 What are potential returns?

The return on icETH is variable in the sense that the effective yield can change as staking and borrow rates fluctuate. At time of writing, the yield on icETH versus ETH is ~10.8%, or 2.65x the staking rate earned by simply holding stETH. However, if the borrowing costs within Aave were to double from the current rate of 0.9% to 1.80%, the yield on icETH would fall to ~8.8% (all things held constant). Conversely, if the staking rate on stETH increased to 10% after the merge, the effective yield on icETH would increase to ~20.8% assuming an ETH borrow rate of 5.0% in Aave. In other words, if the spread between the staking rate and the cost to borrow compresses, icETH holders realize less yield; if the spread expands, icETH holders realize more yield. 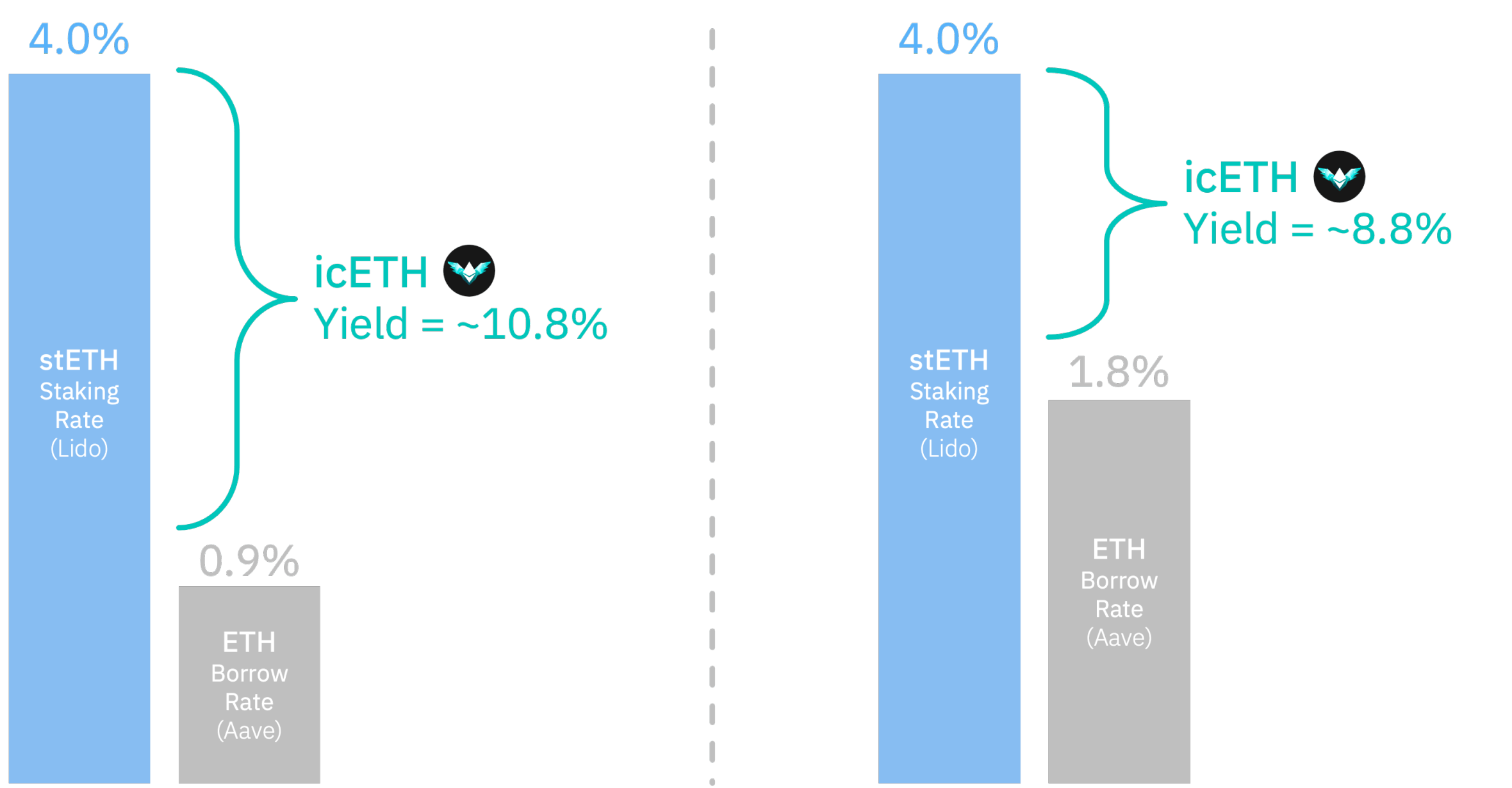 The yield capture of icETH is based on LIDO stETH, which is multiplied via Borrowing on Aave. stETH is pegged 1:1 to ETH and yield is captured by increasing the stETH token balance in the holder's wallet. When stETH is deposited in an Aave vault, the ratio of stETH to astETH will change as the vault balance of stETH increases; this is the mechanism that captures yield. When astETH is deposited into the icETH contract token, it represents ownership of the astETH and thus the underlying, increasing stETH balance. For icETH holders, this means that the yield will accrue to the token price over time.

Like all yield opportunities in DeFi, returns can be diluted as more capital moves into a given strategy, therefore token holders may experience diminishing returns over time. At time of writing, this holistic leveraged liquid staking strategy can support several hundred million dollars in capacity with current market conditions, and that capacity should increase with Aave’s recent rate curve improvements and after the merge. This icETH dashboard provided by the Index Coop monitors the current and historical yield on icETH and tracks the key metrics outlined above.