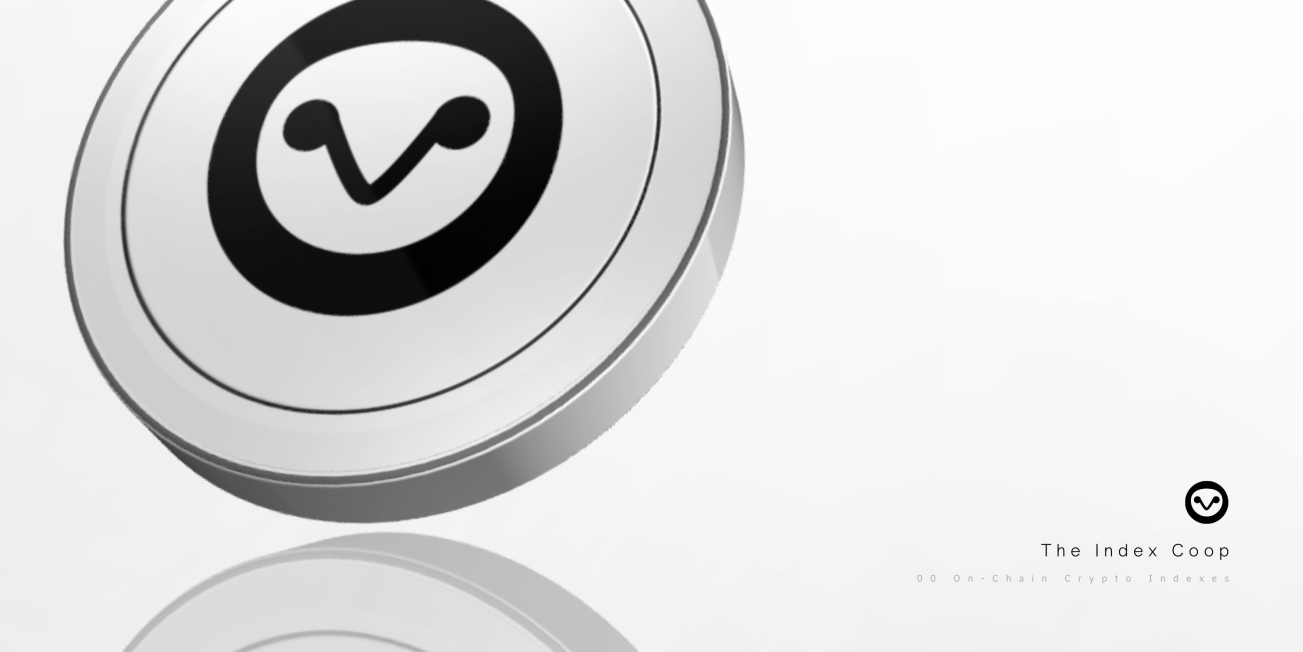 In traditional finance, metagovernance is referred to as “investment stewardship” and has a long history of influencing world markets.  Unique to crypto and web3, we are seeing new ways of using metagovernance which were not possible in traditional finance.  One of the latest innovations has been coined “Levered Metagovernance” and a case study demonstrating masterful use of levered metagovernance was led by FEI Protocol.  FEI was able to turn a $4M purchase of one token, into $36M in the influence of another token. 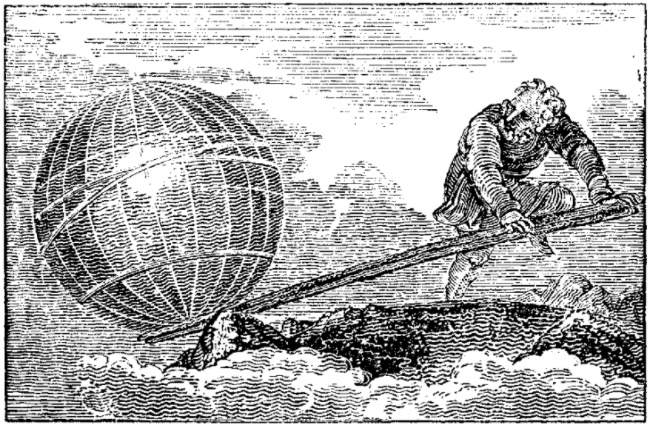 To understand levered metagovernance, let’s look at a specific example.  The DeFi Pulse Index (DPI) is the Index Cooperative’s flagship index product and is a wrapped composition of many Decentralized Finance (DeFi) project tokens.  Many of the originally held tokens in the index have voting rights for their products. Said another way, the holders of the INDEX governance token can vote today on proposals like Compound, AAVE, Uniswap, Balancer and Yearn protocols based on the inventory of original tokens locked in the DPI.  The ability for one governance token to vote on other governance tokens is what is referred to as metagovernance.

Specifically for the INDEX token, these metagovernance votes are performed on the Index Coop Snapshot page with a winner-take-all methodology, meaning the winner of the vote is awarded a single voting block of the entire pool of project tokens held within the DPI index. 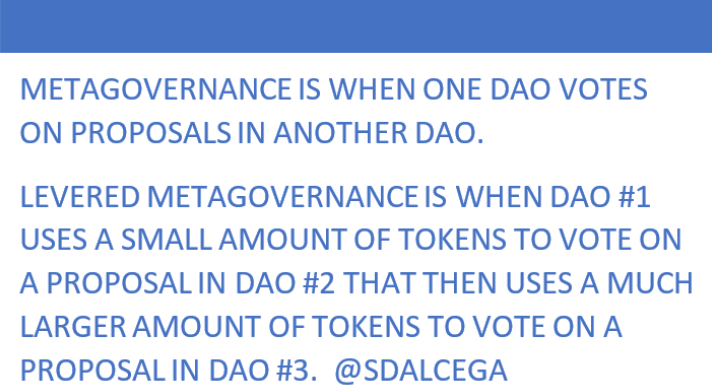 Breaking this concept down further, if a project or person can control 51% of the INDEX governance votes within a particular vote, that person or project wins and can “lever” the results of their vote to include the total pool of project tokens held within the entire DPI index.   In the example we will discuss, FEI protocol used a $4 Million dollar purchase of the INDEX governance token to lever into a $36 million dollar vote on AAVE.  This is what is referred to as “Levered metagovernance.”

In a purely capitalistic sense, a project that wanted to get listed in AAVE could spend a relatively small amount on INDEX tokens, make a proposal to leverage the AAVE tokens held by the Index Coop, lever the power of the tokens contained in the DPI index, and force their way into a protocol.

In a deep dive assessment done on the work FEI actually completed to lever metagovernance with the INDEX token, we learned that the FEI approach was to build a proposal, and then solicit community input and support.  As insurance, FEI then ensured passage by locking down one of the largest voting blocks.

On January 11th, 2021 FEI Protocol announced details of their stablecoin with a blog post that proposed a new stablecoin with a unique value proposition centered on 100% reserved back currencies, true decentralization, and a new concept called Protocol Controlled Value (PCV) to combat the fickleness of mercenary capital associated with user-owned Total Value Locked (TVL).  This novel liquidity approach reduces the risk of TVL capital leaving the protocol for higher rewards elsewhere because the platform owns the assets locked in the smart contracts.  The PCV approach gives FEI the flexibility to focus on stabilizing the peg versus maintaining market competitive TVL rewards to stakeholders.

Over the next few months, the team set about refining plans, raising capital, and most importantly for this paper, developing relationships with potential partners.  Two of those partners were Index Coop and AAVE.

On June 21, 2021 @Brianna, a core team member at FEI Labs focused on ecosystem development posted an AAVE Request for Comment (ARC) post proposing to Add support for $FEI as a deposit currency to the AAVE forum.  The proposal was to bring FEI to the AAVE ecosystem proposing it would “be one of the most decentralized stablecoins on AAVE.”  Going further, Brianne suggested that the FEI Decentralized Autonomous Organization (DAO) could support the new AAVE market by providing immediate FEI liquidity.

Feedback to the ARC was generally positive with most comments expressing the potential growth of the stable coin given its true decentralization vs competitors in the marketplace:

But there were concerns about the maturity of the project.

The proposal only had two minor points of pushback; the first relating to the relative newness of the protocol and the second, a request to have a risk assessment completed for context.

@Joey-FEI of the FEI Core team accepted the feedback and expressed his interest in seeing the risk assessment as well as acknowledging other feedback given on the forum.

His assessment did recognize the relative youth of the project, but Anjan also illustrated how the protocol’s unique approach to liquidity (PCV vs. TVL - described above) improved the stability (peg) of the token.  Key points in the summary include:

After continued discussion, on July 28 Joey posted a temperature snapshot to gauge community support.  The vote was closed on August 2nd, and the results were almost a clear tie with just over 50.19% supporting the addition, and 49.8% suggesting more discussion was needed. 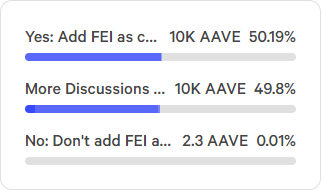 An aggressive approach to the sentiment check might suggest moving forward with 50.19% of the vote, but Joey and the FEI team reverted back to AAVE for more discussion.  Based on previous feedback, on August 2nd, the FEI team added $25M in FEI to seed the liquidity pool, adjusted interest rates, and added TRIBE incentives for borrowers and lending to drive additional volume.   Following a period of 6 weeks with no critical comments, the proposal was brought to the community for vote via AIP 33  Add FEI to AAVE V2 on September 13th, and was eventually executed on September 20th, 2021.

FEI Protocol Uses Levered Metagovernance to get on AAVE

So, what does this have to do with Metagovernance?  In the 6-week period between the temperature snapshot closing on August 02 and the AIP going live on September 13th, Joey was working with the Index Coop to put metagovernance to work.

On September 05, 2021, a team made up of Index Coop and FEI protocol members jointly proposed to the Index Coop to Use IndexCoop’s AAVE holdings to list FEI on AAVE V2.   This proposal laid the groundwork to leverage the power of the AAVE tokens held within the DPI index to 1) submit the AAVE AIP listing and 2) vote for the FEI proposal using the $36 million AAVE tokens held in the DPI index.

Conversations within the Index Coop community were supportive and it was quickly moved to an official Index Coop snapshot vote on September 08 2021 via IIP-82: Use IndexCoop’s AAVE holdings to list FEI on AAVE V2.  On September 11 the poll was closed with higher-than-average Index Coop participation passing with a 99.7% approval.

Given the proposal at Index passed, the Index Coop was directed to leverage the $36 million in AAVE tokens held within the $DPI treasury to vote for the proposed AAVE AIP.   There were some AAVE voting hiccups, but the proposal passed with very broad AAVE community support.  In the snapshot below you can see that the second largest voting block was the Index Coop metagovernance vote representing about ~22% of the “Yea” votes. 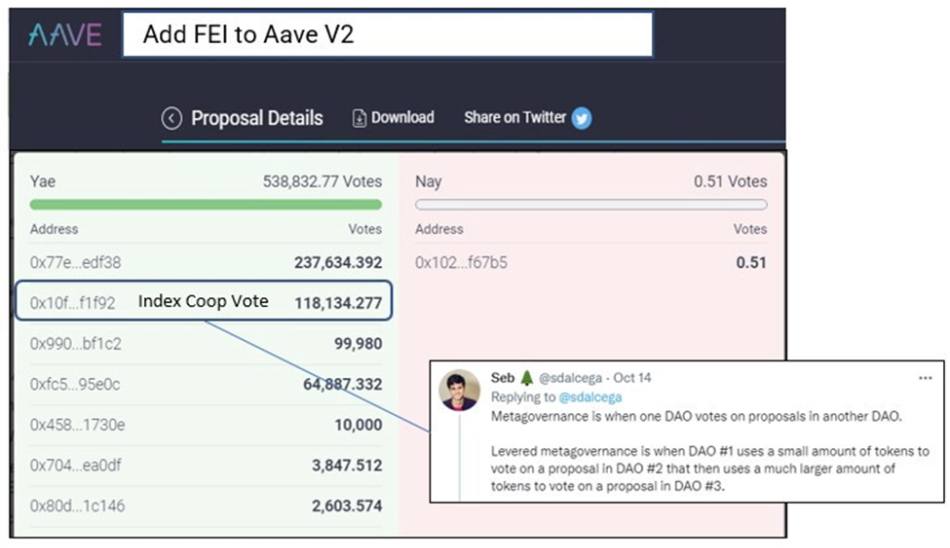 If this sounds complex, you are right, and that is only part of the story.  FEI Protocol set the groundwork with Index Coop long before the September 05 proposal.  Sebastian Delgado of FEI Protocol indicated that lasting partnerships between protocols has always been a core principle of the FEI team.  Strategically, FEI was already investing in other governance tokens primarily to solidify partnership and align incentives with other projects, but also to diversify their portfolio.

In the case of Index Coop, the levered metagovernance component was an additional driver for building a solid relationship and diversifying their treasury with INDEX and DPI, but it was not the driver.  FEI bought into INDEX because it was strategic, and the metagovernance factor was a bonus.

The relationship between Index Coop and FEI was actually put to work several months before the initial July 09 AAVE posting.  Given there was not enough liquidity on the open market for FEI to purchase a significant amount of INDEX, Matthew Graham of Index Coop worked to identify possible INDEX token holders who would be willing to divest their INDEX tokens, and this was not an easy task.  Many larger INDEX token holders did not want to sell or were looking for a significant markup.  Through a series of conversations and negotiations, Matthew and Joey were able to secure a $4 million dollar purchase of INDEX tokens via one of the core investors of Index Coop who understood the value of FEI.

First, as demonstrated, FEI worked very hard to develop a valuable proposal for AAVE and continued to refine the proposal based on community feedback.  The temperature check snapshot combined with adjustments to the proposal likely built goodwill within the project that led to broader support.   Secondly, the partnership that FEI had developed with Index Coop with their original investment in INDEX created contacts and good will across both projects.  When the idea for levering the power of INDEX, FEI found a willing partner to help.  Had FEI tried to shortcut either of these two scenarios, the outcomes could have been very different.

How much influence does the INDEX token have?